The Mother Lodge Temple was consecrated in 1893.

From 1140 – 1560 the masons met in the Chapter House, in Kilwinning Abbey. However after the reformation, when the Abbey was destroyed, they met in local houses, the most famous one being  known as “The Masons Howf “, situated at the Old Cross in Kilwinning. They were later given permission to use the Earl of Eglinton’s Courthouse in the town. Then thanks to the generosity of the Earl of Eglinton, in 1779 the Old Lodge was built at the entrance to Kilwinning Abbey. Regrettably this fell into disrepair and in 1893, the present day Lodge was consecrated, by the Hon. Thomas Cochrane, M.P., R.W.M, of the Mother Lodge, and as such the P.G.M. of Ayrshire. 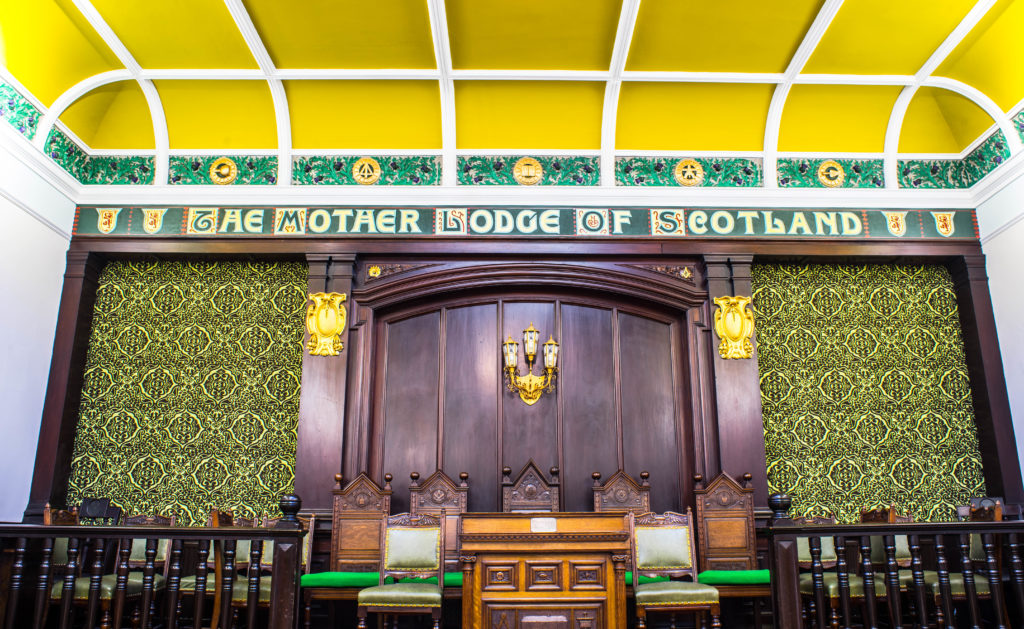 The Right Hon. Sir James Fergusson, Bart. of Kilkerran was born in Edinburgh in 1832 the eldest son of Sir Charles Dalrymple Fergusson, fifth baronet of Kilkerran. He was educated at Cheam, at Rugby and the University of Oxford, entered the Grenadier Guards and served in the Crimean war where he was wounded in November 1854. Elected as a Conservative for Ayrshire he entered the House of Commons in May 1855. He retired from the army on 9 August 1859. As the RWM of Lodge Mother Kilwinning No.0 he then became the Provincial Grand Master of Ayrshire from 1859-1864. He was sworn in as the governor of South Australia in 1869 and had a long political career in Australia before returning to England. He passed to Grand Lodge above in an earthquake in Jamaica in January 1907.

William Boyd 4th Earl of Kilmarnock was the Grand Master of Kilwinning from 1742 to 1743. William was appointed as colonel of the hussars, by Bonnie Prince Charles Stuart and fought at the battle of Falkirk, in which the young adventurer was victorious, on the afternoon of the 17th of January, 1746. He was unfortunately badly wounded at the battle of Culloden on the 16th April 1746 in an attempt to besiege Stirling castle from the Duke of Cumberland. He was captured, then carried to London and imprisoned in the Tower. A bill of indictment having been found against him, he was brought to trial and sentenced to death. On the 18th of August 1746 William Boyd was beheaded by axe.

Archibald George Montgomerie 17th Earl of Eglinton and 5th Earl of Winton was the Right Worshipful Master of the Mother Lodge from 1949 to 1957. Archibald was installed as the Grand Master Mason of Scotland from 1957 to 1961. A famous family in the annuls of Masonic and indeed Scottish history who have a long association with Lodge Mother Kilwinning. The foundation stone of Eglinton Castle, home of the Montgomerie’s was laid in 1797. The castle today is perhaps more remembered as the scene of the great tournament in 1839. The earliest Montgomerie to become the Grand Master Mason of Scotland was Alexander 10th Earl of Eglinton from 1750 to 1751.